Everyone’s getting back to their routine.  That being said, even though I’ve kept up with throwing out 5 items per day, I’m not making a dent in the major problem areas.  I suspect this is because the problems are so large and at the holidays we’ve had a lot of stuff enter the house.  So, I’m going to try to use this space to show my progress thereby encouraging me to stay on track. 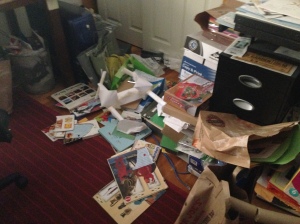