There are many phases one goes through with a child, let alone twins.  So, how do you get through that first year when the twins are small and you have a toddler running around?

First, while the babies are still in their bucket seats, they are very portable.  Learn to carry both buckets at once; people will open doors for you.  This is important because (as long as you have reasonably cooperative babies) it extends the window when you can do things with your older one that you did before.  Once the twins are too big for the buckets, and before they’re good walkers/listeners, you will be much more limited in your excursions. 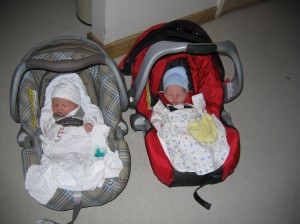 The mall play areas are great  because kids are expected and they’re fairly open so you can have better access to both your stroller and the kids – great in particular when you need to feed the babies, but keep the toddler entertained.  Different ones are busy at different times so learn the schedules of those near you. Basic grocery shopping is another good activity; it will take longer with everyone in tow anyway. Similar to the mall, there is movement and things to see.  You don’t have to go to your “home” library, you can also explore different libraries for the play areas.

Beyond that, think outside the box. I took mine to HMart once. We didn’t buy anything, we just looked at all the different/interesting foods. I’ve had mine at the skating rink – bleachers are endlessly fun for 2/3y climbing (though no good for early walkers). Another activity mine liked when they were small was shoveling. I bundled up the twins and put them in the stroller (in the edge of the garage to keep them out of the weather more, though this isn’t critical) and they watched my 2y and I shovel.

Lowe’s/Home Depot is great too. Your toddler can sit on all the lawn tractors. There’s lots to look at, big wide aisles, NASCAR carts, a forklift doing something, and you don’t actually have to buy anything.  You will, however, plan all those project you can’t do now but will need/want as three children get bigger.

As I said at the beginning, when the twins outgrow the bucket but still require a stroller/being carried, there are definite limitations.  So, even though it can be tough to get out of the house try to pack in what you can early so you’re not tired of home when it just becomes much easier to stay there.