I had relatively big stops at Wegman’s at the start and end of this week.

I did my main shop of the week on Tuesday: $107.59 at Wegman’s.  I intended to buy Wegman’s Tater Puffs, but they were out of all sizes.  That’s been a real issue lately.  I can’t remember the last time I went when they actually had everything I wanted; there are always some things are out of stock. 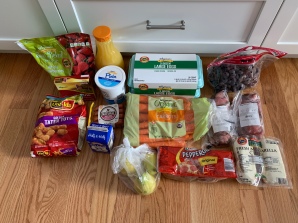 I went to Stop & Shop on Thursday mostly for milk and sale items.  I spent $70.42 total including five gallons of milk that didn’t make the picture.  Cheese, Doritos, onions, and spinach were buy one, get one free.  Strawberries were buy one, get two free! 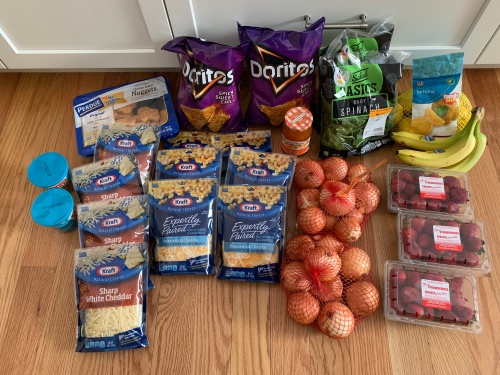 Thursday afternoon I picked up my Farmer’s to You box for $43.40. 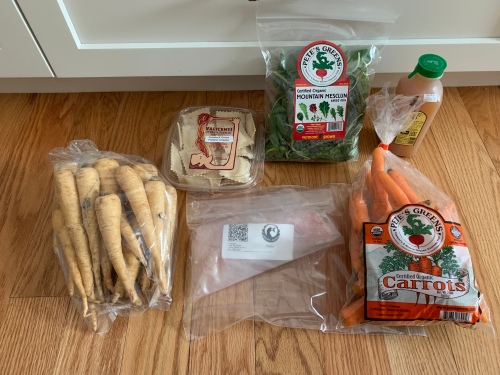 On Sunday I was back at Wegman’s to pick up some items for an afternoon birthday party.  It was so busy!  I spent $91.64 on grocery items to use this coming week, including six gallons of milk and two baguettes that didn’t make the picture.  This time they were out of bulk limes so I ended up with organic limes because in bulk they were still less than loose limes.

That brought my total for the week to $313.05.  Hopefully, though, I won’t be doing much shopping this coming week.

Sunday:
Pizza at the birthday party.