I had intended to go to BJs on Tuesday, but a spontaneous park play date took up that time.  So, I went to Shaw’s instead.  I got a gallon of milk (expensive here so that’s why there’s not more), apples, goldfish, and my usual Shaw’s items – oatmeal, pizza dough, and pizza cheese. 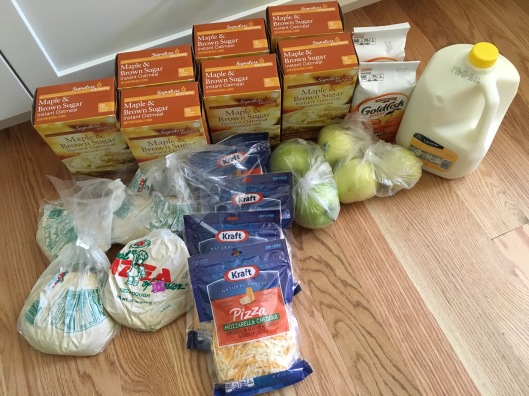 In the afternoon, I went to the Farmer’s Market.  It’s my first trip of the year, which is much later than usual.  I don’t always go much at the beginning because its mainly greens.  Then we were moving so I was paring down and not cooking as much.  Last week it rained; this was desperately needed so I won’t complain.

Everything here is local and I was happy to see the apples because Shaw’s hadn’t had Macintosh.

I made it to BJ’s on Wednesday.  I got 8 gallons of milk, along with the items shown.  I don’t actually need this much jelly, but it was free with the peanut butter purchase and it will keep. 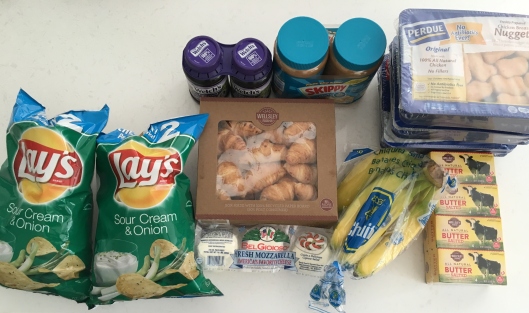 I’m still working through the holes created as I used up but didn’t restock before moving.  So, Thursday’s trip to Wegman’s was motivated by a lack of Chili Powder.  If I’d realized this earlier I would have picked that up at BJ’s.  I also used up our Red Wine Vinegar before moving.  The other items are for regular use.

Saturday we were at Wegman’s again (this was planned during the previous visit) to get a roast to BBQ.  We also started to restock the school supplies – craisins and granola bars.  With this were 12 gallons of milk (1 was left from the 8 purchased Wednesday at BJs).

Now for the meal plan.

Sunday:
The new dishwasher has failed so in an attempt to not generate too many dishes I opted for take out pizza.

Tuesday:
I’m going out so we have leftover chicken pot pie.