Unless you have been in hiding, or don’t think about kitchen stuff at all, you probably know that in December Cuisinart recalled about 8 million food processor chopping blades because metal fragments were coming off in people’s food.  You probably also know that they’re getting a lot of bad press because of how long its taking to get people new blades, despite telling them to throw out the old one immediately.

I filed for my replacement blade on December 16, 2016 – three days after the recall went out.  On December 22, I received a form email, thanking me for my patience.  It also said they’d let me know when my blade was on the way.  I received basically the same email again on February 4, 2017.  It also included their much discussed online recipe book (apparently it contains recipes that require the chopping blade), but I haven’t looked at it.

Well, months went by and I didn’t hear from them again until it just showed up on Friday.  I definitely would prefer to have the blade vs another email, but it should be pointed out that they never did alert me that it had been shipped.

Some pictures of the new vs old blade and the lengthy set of instructions (obviously meant to prevent them from being sued by the customer or trash collector that cuts themselves).  Clockwise, its the new blade in its complete packaging, the new blade out of the packaging, the two blades together for comparison, and the old blade packaged for the trash. 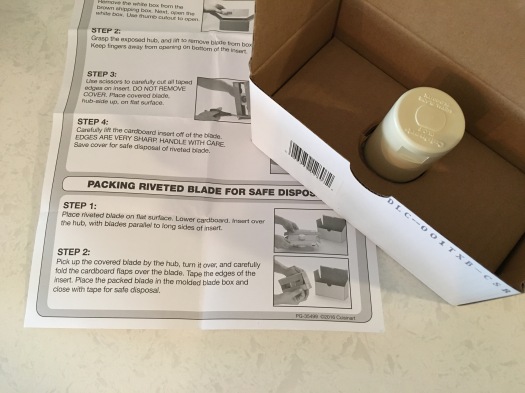 I have used the new one and it works fine.  It’s also easier to clean, which is a nice side benefit.  But, it took the full six months to get here.

Other things that happened last week: