I made for grocery stops last week, which is more than usual.  One was the monthly trip to BJs.  Two were to Shaw’s!  I usually only go there once every six weeks or so.  But, they’ve been very low on pizza dough when I’ve gone recently and we’ve been using more of that because of baseball season.  You may see it as one of my stops this coming week also.

On Monday, I made my first trip to Shaw’s.  I restocked on oatmeal, which was on sale.  Kraft shredded cheeses and grapes were also on sale.  The Coke was for that afternoon.  And, I got all the pizza dough balls they had.

On Wednesday, I went to BJs and Stop & Shop.  Both trips were for primarily non-food items that were on sale/had coupons.  You’ll see in the menu below that the chicken nuggets are not lasting long right now. 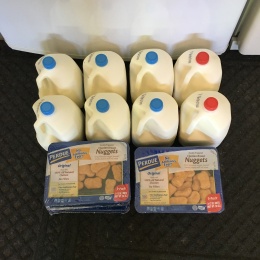 Now for Stop & Shop.  Rather than listing everything that was on sale, I’ll just say that the bananas (39¢/lb), shallot, and bagels were not on sale.

Then on Friday, I tried Shaw’s again.  Two was it for pizza dough, but I did find some of the large bacon packages.

As for what we ate, it was incredibly boring!