I’m trying to get back on track this week.  The school rush is winding down and things are settling into more of a winter routine.

On Tuesday, I spent $60.28 at Wegman’s.  This was almost exclusively a restocking of things I buy there trip.  Though, you’ll see lots of flour and sugar through the fall because both are on good sales, max 2 per shopping trip.  So, if I get 2 each time I should be stocked up at least through the spring baking season, and probably for most of the year for sugar. 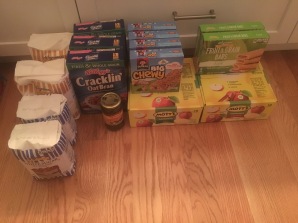 On Thursday I spent $122.29 at BJ’s.  It had only been a short while since I’d been there before, but we were on soccer snack duty so I went primarily to pick up sliced apples and bananas.  I also needed to make a return at Target, which is very close to BJ’s (and both are rather far from our house so they make a good combo trip).  I spent $17.26 on grape juice and Craisins there.

Finally, on Saturday I spent $22.75 on (mostly) local produce.  The pears are not local; and, the potato salad is not produce.

All that being said, we’re continuing eating quick, easy meals this month.