Inevitably, after a low cost week, this one was higher.  It’s also been about a month since I’d made a big trip to BJs or gone to Shaw’s.  I did both this week.

On Monday, I spent $153.12 at Wegman’s.  Sodas were on sale, along with carrot puree, Brussels Sprouts, and the salad.  You’ll see a lot of these items showing up in the menu this week.  This was my last grocery trip in January so only this one will be reflected in the January numbers.

I had been wanting to do other shopping sooner, but sickness kept us confined to the house through mid-week.  Thursday evening I was able to run to the farm stand for a few items that totaled $18.35.  It was fundraising day for the elementary school so I’d had this day in the plan for a while.

I also spent $32.23 at Stop & Shop Thursday night on items that were finishing up their sale cycle. I had planned to get some other cheese also, but they were out so I got a raincheck instead.  In many ways this is just as well since we don’t really need that other cheese right now.  I’ll pick it up at the sale price when we do.

I did another batch of shopping on Saturday.  First, I spent $35.12 on oatmeal and pizza dough.  Unfortunately they were out of pizza cheese so I needed to go to another location (nobody else sells the brand we prefer) on Sunday.  I spent $11.28 on cheese; more than we needed for the Super Bowl, but enough to meet the minimum purchase for the best price.

Saturday afternoon I went to BJ’s during baseball practice.  I spent $164.94 on items that should do us for most of the month, apart from the milk. 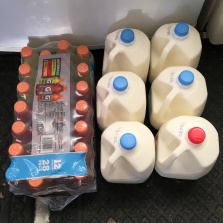 That brings me to $451.68 for the week.  Yes, a very high week.  But, because the week splits two months it will not all be reflected below; most will be in the February numbers.

Overall, not bad.  Some high weeks and some low weeks, but it leveled out.

We finished out the month on a positive note, but then things went downhill.  Maybe next week we can get back on track.