This post contains affiliate links.  However, I chose to try the meat share and paid for it myself after hearing about it from friends.  If you live in the greater (like an hour+) Boston or New York City area, you can give them a try and get $10 off your first order.

Our first Walden Local delivery arrived on October 16.  This is a meat share program.  You sign up for the level of the program – everything from grind only to custom, types of meat you want to receive (beef, pork, chicken, and lamb), any dietary restrictions, the number of pounds per week (roughly 5-30), and the number of people you are feeding.

We went with a 20 lb custom mix of beef and pork for six people.  As it turns out six is the maximum you can sign up for on their website, but we eat like 5-6 adults currently so that works for now.  Custom still doesn’t mean we get to choose exactly what we get.  We choose the categories we would be happy to receive and they send a mix of those things.  I’m told they are very responsive to emails and other specific info.

So, what was in our first delivery?

They sent a cardboard sheet with some guidelines, a small notebook, and two recipe cards.  Apparently they send 1-2 recipes per month that go with your meats.  We tried and liked both.  It’s all packed in a large reusable cube with two interior liners and dry ice.  The cube, liners, and guidelines get returned for future use at the next delivery. 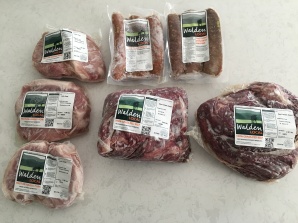 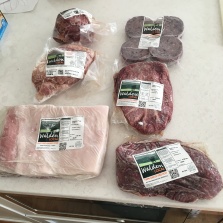 All in all, it was a good variety.  We wouldn’t normally eat this much sausage so I’m going to have to see how that is going forward and likely come up with some new things to do with them.  But, what we’ve tried so far was indeed tastier than similar products bought at the grocery store.

Now, for better or worse our freezer was already pretty full when the Walden Local delivery arrived because the fall meat sales have started.  So, this needs to be eaten down also and not lost among the new goodies.  I’m not going to go through all the proteins as I buy them each month, but until this comes down a bit I’ll let you know everything we have on hand each time a Walden Local delivery arrives. 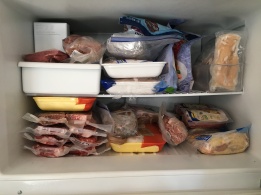 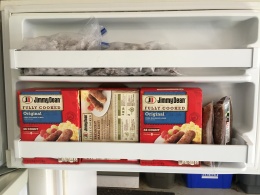 First, we had chicken nuggets and meatballs.  We will continue to have these available, though I hope our chicken nugget consumption will go down shortly when soccer season comes to an end.