This was a week of many stops, largely because I’d like to avoid the grocery stores next week.  I will have a Farmer’s to You pickup this Wednesday (moved from Thursday because of Thanksgiving), but hopefully I’ve planned well enough to get through to next weekend otherwise.

I started out on Tuesday with a trip to Stop & Shop.  I would have preferred to go to Wegman’s and save this for later in the week, but that window closed when my haircut took longer than expected in the morning.  But, I needed milk so I had to go somewhere.  Thus, I ended up at Stop & Shop during the boys’ swimming lesson.  Milk is a little cheaper at Wegman’s so I got three gallons (not pictured) and waited on the rest for my Wegman’s trip.  The trip totaled $64.23 and, apart from milk, was mostly sale items.

So instead, I spent $87.85 at Wegman’s on Wednesday.  More milk and rather a lot of produce.  The apple crostata was my free item of the month and it was very well received.

As luck would have it, Wegman’s was out of hot dog buns.  And, I realized we were out of juice, so I went back to Stop & Shop on Thursday.  While there I did find the green beans we wanted for Thanksgiving and so checked off another item.  The total was $45.58.

Also Thursday, I picked up my Farmer’s to You weekly order.  This week I spent $48.90 on day boat white fish so I didn’t take a picture.  We’re all pretty certain it was cod, but it wasn’t actually labeled.

On Saturday, I spent $34.01 at Shaw’s.  My primary reason for going was pizza cheese, but everything you see was on sale. 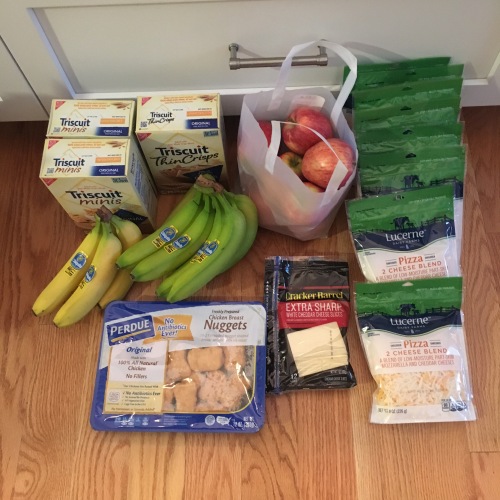 Finally, we spent $85.71 at Wegman’s on Sunday morning.  It was definitely crowded, but not terrible for the weekend before a major food holiday. 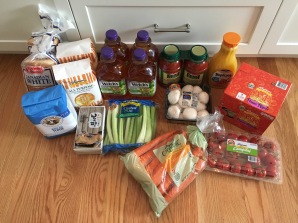 That brought the weekly total to $366.28!  As I said at the top, ideally this will last us through the weekend.

Despite evening sports coming to a close, this was another week of many split dinners.

Monday:
Unfortunately our dishwasher started leaking over the weekend.  Equally unfortunately, the repair guy didn’t show up until just before 5:00 pm and it was just the evaluation to order parts.  Thus, I reverted to take-out pizza.

Tuesday:
Our oldest was invited to the Little League awards dinner since his team won last season.  Three of us went to that, while the younger kids stayed home with chicken nuggets and carrot sticks.

Wednesday:
Husband was late and two kids were at a play date.  So, the rest of us ate leftover pizza.

Saturday:
Two kids ate at a birthday party.  Therefore they youngest three had chicken nuggets and carrot sticks, while us oldest three had homemade pizza late.