We left Pennsylvania and continued northeast into New York State.  Once again it rained (and here I mean truly poured) so we chose to visit Howe Caverns in the morning (underground = not wet).  The boys did well on the long walk, and enjoyed the boat ride.  Most importantly we didn’t lose any children through the railings, nor any shoes which was the true miracle. 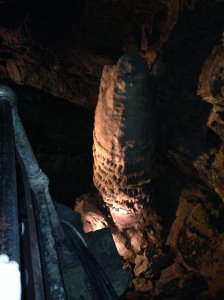 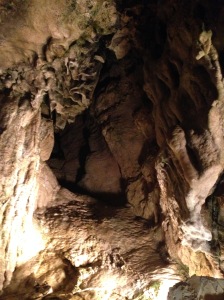 I have been to Luray Caverns in Virginia which is admittedly far more spectacular.  But, this was well done and a good introduction for the boys.  Though, we did spend a lot of time underground in two days!

After lunch at the cafe at Howe Caverns we headed over to Cooperstown to visit the Baseball Hall of Fame – someplace I’d always been interested to see.  I was amazed at the kitchy small town feel (and lack of modern hotels/restaurants).  The Hall was also smaller than I had anticipated, but it was a good size for the two hour parking limit the town imposes and for the boys’ attention spans.

Having grown up with the Orioles and now closest to the Red Sox, I found it interesting that their lockers were adjacent.  So, I took a picture of both together.  We looked for Curt Shilling’s bloody sock, but didn’t find it.  I seem to remember hearing something about it being removed after some of his more recent issues, or maybe we just missed it.

I realize this is hard to see in a photo, but we were also interested in the charts of statistics they had for each team.  This is the Red Sox.