This has been a busy week – for reasons both expected and not.  So, posts got delayed.  But, more of that on Tuesday’s post.

I did my big shop of the week at Wegman’s.  The mac n cheese I was buying for the boys (because it was the only one they’d eat) seems to have been discontinued so I bought one box of what seemed like the most similar kind.  We’ll see.  The cans are beef broth.  The paper contains tuna steaks, which we had for dinner.  As you can see I also tried having them cut up my pork shoulder.  Oddly, they charged me less once this had been done, I guess they reweighed it minus the bone.  BUT, it wasn’t trimmed which meant I had to do a bunch of work at home and probably lost some good meat in the process so I won’t have them do it again. 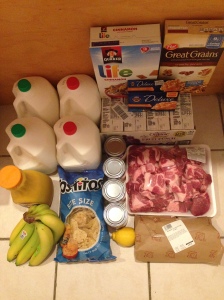 I went to Shaw’s again to actually stock up on pizza supplies, since this time I could get home more promptly to get it in the fridge.

Friday I went to BJs.  This was part of a big trip with all the boys that also included Target for school supplies.  We had success there for everything except a small flexible binder (the list was pretty short so this wasn’t very difficult) that we had to get at Staples over the weekend.

Under the bread is more milk.  The long meat packages are ribs for our Sunday BBQ.  The hot dogs are for the Saturday BBQ (isn’t summer great!) and the other meats are for later.

Finally, over the weekend we went to Tomato Fest at the farm stand.  I had planned to buy tomatoes, but the boys won a bunch playing various games so that was unnecessary.  Obviously I got plenty of other items though.

There are a dozen ears of corn, a bunch of swiss chard, a dozen apples (split among two varieties), wax and green beans, chicken salad, as well as many more easily identifiable items.

My original menu plan got disrupted by the unexpected events, but I can supply the actual one here since I’m late to the party getting this posted.