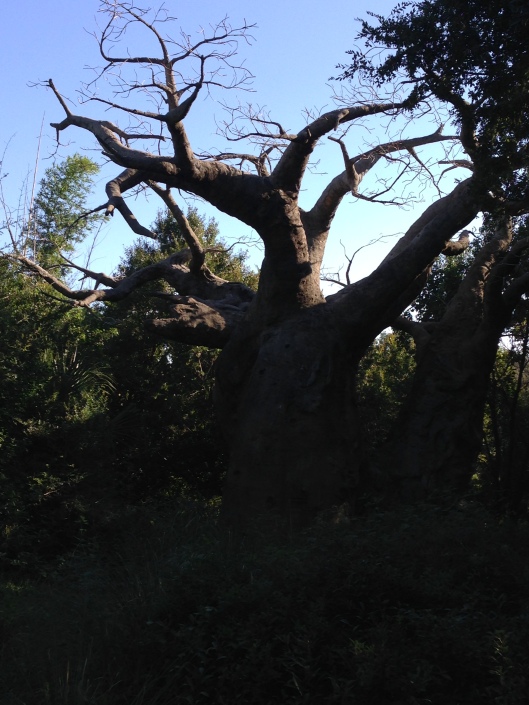 Animal Kingdom is one of the newer parks.  It is a great change of pace from the Magic Kingdom.  It feels like there is more space (though you find out quickly the main paths are still quite narrow).  It is shady, less hectic, and just generally more relaxing.  Plus, Animal Kingdom closes earlier than the other parks so it forces you to have a big of a slower day.  Consider a day in Animal Kingdom to recharge instead of taking a day off.

It’s Tough to Be a Bug! is a Fast Past attraction, but its definitely not what I would use my Fast Passes for in Animal Kingdom.  The description on the brochure says “Some creepy crawly moments in the dark.”  They are not kidding!  While the show is ok when the lights are on, the dark and creepy crawlies make this an unfriendly show for adults and kids alike.  Steer clear!

DINOSAUR is a good ride and one I definitely recommend for older elementary on up.  However, its height restriction of 40″ implies younger kids can ride.  They technically can, but this might be the scariest ride in all of Walt Disney World.  If you choose to take a preschooler or early elementary child on this ride be prepared for some seriously scary moments with the dinosaur animatronics.

Finding Nemo – The Musical is well executed.  However, don’t use your Fast Pass here unless you have a Nemo loving child in your group.  And, if your children are not fans of Nemo or unfamiliar with the story this may not be your best choice.  The musical covers the entire plot very quickly which can be confusing to those who haven’t seen the movie.  It also spends a high percentage of its time on the sadder/scarier parts of the story for plot development, which can be hard on a young viewer.

My top recommendation in Animal Kingdom is to use your time to explore the animal trails.  Even if you live near a large, well populated zoo, the Maharajah Jungle Trek in Asia and Gorilla Falls Exploration Trail in Africa are well worth your time.  If you do all of the animal explorations (and you should) there is more in Animal Kingdom than you can do in one day.  It takes about a day and a half to see everything.  Or cull some of my over-rated attractions off your list to fit in the good stuff.

Flame Tree Barbecue is a not-to-be missed stop in Animal Kingdom.  The excellent food provides a welcome respite from the so-so hamburgers and chicken nuggets found at so many of the quick service restaurants throughout the parks.  Also, grab some onion rings or other sides on the menu as they are very good and can count as snacks for those of you on the meal plan – ask the cashier about that option.  There is usually plenty of seating, but it is a big spread out so you may have to head a bit farther in than you realize.

The Kilimanjaro Safaris and Festival of the Lion King are our family’s must see attractions in Animal Kingdom.  If you are not using your Fast Passes for the thrill rides (Expedition Everest and Kali River Rapids can have very long lines without Fast Passes), use them here.  Otherwise, head for Kilimanjaro Safaris first thing in the morning to stay ahead of the line.  You can also check the app for wait times during the day also, but Animal Kingdom is big enough that you will prefer to make an organized loop vs criss-crossing the park to go to and from rides.  A Fast Pass for the Lion King gets you closer to the action, but the theater offers good seats for everyone so just jump in line if you don’t have a fast pass.

Animal Kingdom does not have built in nap options.  But, it is much quieter and shadier than the other parks.  It also generally opens earlier and closes earlier.  Treat Animal Kingdom as a relaxing day.  If you have young children who still nap, you will not be racing for the big name rides.

If you can get there promptly at opening, the timing generally works to hit the Kilimanjaro Safaris and then go directly to the Festival of the Lion King.  From there, explore the animal trails and you take a relaxing loop around the Discovery River.  Head in a clockwise direction and you will end up in DinoLand U.S.A. where you can ride the TriceraTop Spin and then play in The Boneyard until they run out of energy.

If you choose to head counter clockwise, just realize that not all the seats at the Festival of the Lion King have backs so you may end of supporting your sleepy child.  That being said, that show is a good way to end your day also.

Note than Animal Kingdom is a long way from any resorts, even those in the Animal Kingdom area.  This, combined with its relatively short open hours, make it the least favorable park for returning to your hotel for a rest during the day.  However, if your child will sleep in the stroller, the miles of shaded walking trails make it a good place to keep the rest of the party entertained.