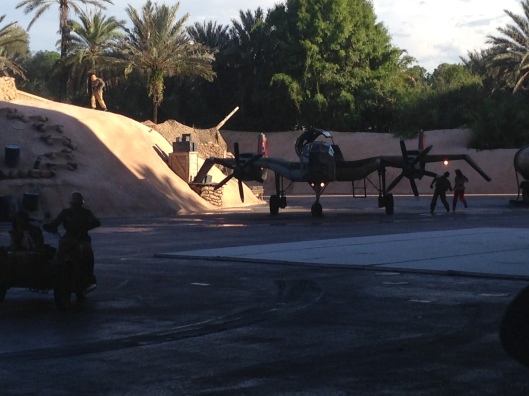 If you’re going to skip a park on a Disney visit with young children, it should be Hollywood Studios.  It’s not that its a bad park.  It’s that so much of it is geared towards elementary and up.  Young kids will have a lot of time on their hands.

For a newer park, it is not as stroller friendly as one would think.  Sunset Boulevard is shockingly narrow, especially with the vendor carts, and has actual curbs (as many Disney “streets” do, unfortunately).  Thankfully, it largely goes to attractions young children won’t visit, including the Rock ‘n’ Roller Coaster and Tower of Terror.  There is a shady waiting area near these rides though, so if you make it through the crowd it is a reasonable place to pass some time with the non-riders in your group.  Fantasmic is also at the end of this road; we’ve never been.  One of the large theaters is about halfway down if Live Shows are of interest.

It is also easy to get stuck in the Center Stage area also as it is mostly accessed by stairs.

Young Star Wars fans may be interested in Jedi Training, which is offered for ages 4-12.  It is cute.  But, you and your child must race to the Indiana Jones Adventure Outpost first thing in the morning to register in person.  This can take a very long time – think an hour plus.  And, you may not be able to get a time slot that doesn’t conflict with your Fast Pass/Meal timeslots for the day.  With many of the attractions in Hollywood Studios being around 30 minutes, and only happening a few times a day, adding a random chunk of time at the last minute can really throw off your plans.  Get your Star Wars fix by going on Star Tours as many times as possible.

Instead, I’d recommend making a bee-line to Toy Story Mania, which will have a very long line later in the day.  Note:  Toy Story Mania has been closed for technical problems for significant chunks of the day each time we’ve been there.  If you have a Fast Pass, they will honor that if the ride reopens, or you can use it on another ride.  But, trying to go first thing in the morning also gets you in before the ride breaks down.

Everyone should go on The Great Movie Ride.  You should not need to use a Fast Pass for this one; there are better Fast Pass options for all ages.  Spoiler Alert: With the exception of some fake gunfire and the Alien, this is a pretty tame ride.  Adults will enjoy seeing bits from famous movies and there’s still enough going on the keep the attention of the little ones who don’t really know what they’re looking at.

Napping is a bit of an issue.  First, if all the kids in your party still nap, this probably isn’t the park for you.  Get your Frozen fix over at Epcot.

The only show quiet and comfy enough for napping is Voyage of the Little Mermaid.  But, its only 17 minutes long so just as they get settled you’re off again.  There are plenty of smooth paths and shady areas if they will nap in the stroller.

Hollywood Studios is largely geared towards an older audience.  The height restrictions are taller and on most rides.  Small children will be largely limited to Theater shows.  To get those in you will need to check the schedules in advance and plan your day as each show is roughly 30 minutes and may only happen 2-6 times.  The shows are also very loud, which doesn’t work for all kids.  But, they are generally good so if one looks right for your party, definitely put it in your vacation plan.