This was a relatively light week for groceries.  I made two trips to Wegman’s and one to Stop & Shop.

My first stop was Wegman’s on Monday, when I spent $87.43.  Looking at it, this was a rather produce heavy shop for us.  The jicama was free and I had a coupon for the corn tortillas.  We used the tortillas, cilantro, chicken, and a few other things to make enchiladas later in the week.  This was the second time I’d made them.  We decided we like the recipe, but not corn tortillas which is just as well because we always have flour tortillas in the house and corn tortillas were really a pain to work with. 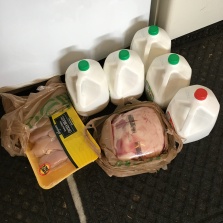 I made another stop at Wegman’s on Wednesday, spending $86.68 in advance of the second Nor’easter.  Included is a third package of corn tortillas.  This was before I had made the enchiladas and I was worried I didn’t have enough with just two packages. 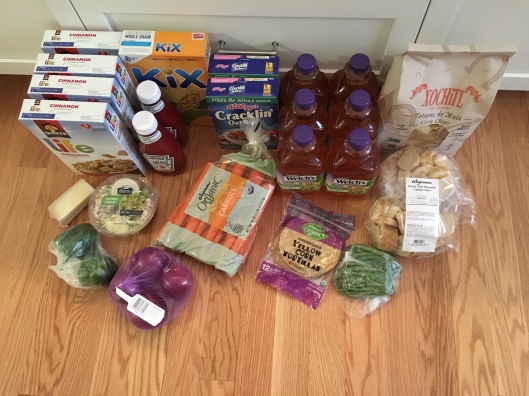 Finally, after we were finally freed Saturday from the snow and downed trees I spent $57.67 at Stop & Shop.  I could have put this off until Monday, but I hadn’t been out of the house in a few days and with a third Nor’easter in the works I have other stops to make then.  This largely covered the week’s sale items.  In fact the only things that weren’t on sale were the macaroni & cheese, cake mix, margarine, hot dogs, mushrooms, and bananas.  I missed a chunk of watermelon (on sale) in the picture.  The gum and granola bars were free; I wouldn’t have bought them otherwise.  But, for free, why not.

Dinners were a mixed bag.

Sunday:
Hot dogs and assorted sides for the little ones, who were the only ones home.