Apologies for the hiatus; May just got the better of me!  Hopefully I’ll get back on track this week and you can find out just ridiculously many baseball games we’ve been going to over the past few weeks, along with soccer, school, and everything else.

I did get to the grocery store (and take pictures).  Meals were fairly boring – lots of chicken nuggets, eggs, hot dogs, homemade pizza, etc.  This is always a month to just get through, not a month of gourmet eating.

I made a lot of stops the first week, though that included some very small dollar ones.

The biggest stop of the week was at BJ’s on Wednesday.  I spent $92.32 on mostly churn items – milk, bread, and chicken nuggets – plus a few items that were on sale. 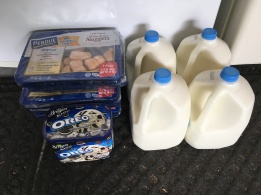 I also stopped by the farm stand on Friday, spending $14.92.

I then spent $52.95 at Stop & Shop on Saturday.  And, feeling somewhat disjointed, I ran into Stop & Shop again on Sunday for fish (which I failed to take a picture of) for another $5.99.

That brought Week 23 to $250.42, which is well within goal considering that it included a BJ’s stop.

On Thursday, I made the first of two larger trips to Wegman’s, spending $107.43.

On Sunday, I had to go to Wegman’s again.  Our oldest has decided he really likes smoothies and since it had been a trial I hadn’t gotten that much quantity.  Notice I have now stocked up (though I’m not sure it will last the week)!  This round was $90.89.

That brought the total for Week 24 to $227.10.  This is a little higher than I would like, but hopefully the month will balance out.