Day three was hot again so we opted for something indoors.  Because our hotel was not near downtown we again opted to drive and found there was ample parking (in unrelated buildings) behind the Air & Space Museum on the National Mall.

We have been here before.  Some things the boys wanted to see again were the plane and cockpit you can enter as well as the walk-through of the Skylab.  See a theme?  For some reason the walk-through of the mock aircraft carrier is not as big a draw.  They also complete planes and spacecraft.  We still have a harder time convincing them to read all the smaller displays although we adults would like to.

Once again we tried to go through in an order different from what we may have done before.  We headed for the space area on the eastern end of the first floor first.  Space interests everyone in our house so it was a soft entry. 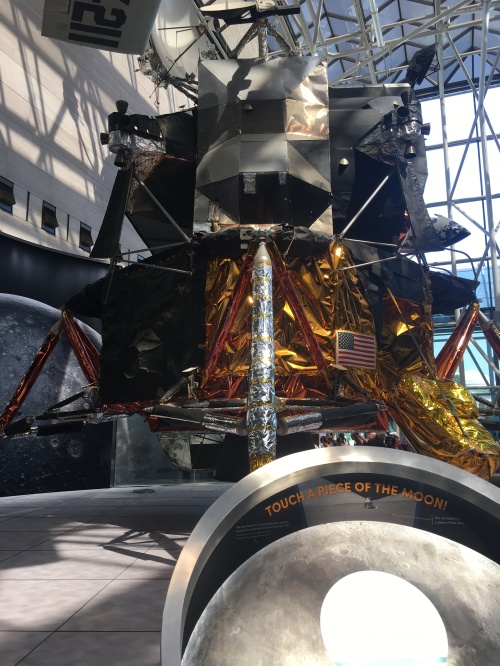 We were going to stop into the large McDonald’s for lunch, but found it closed for renovations.  (I don’t know if it will be a McDonald’s after again or not.)  In its place they had fridge and freezer cabinets with sandwiches, salads, and microwaveable stuff.  None of it was very kid friendly so we ended up leaving for the nearby McDonald’s and returning after lunch.  Thankfully, while crowded, the nearby McDonald’s was big enough to handle the onslaught (I don’t think we were the only ones.).  It also had very clean bathrooms!

We returned to the museum after lunch to finish the eastern end of the first floor.  We continued with the western end and then headed upstairs.  The solar system rooms went quickly, but its always a challenge getting out of “How Things Fly.”  It is very popular and they do a good job keeping all of the hands on activities working.  This room is a big tricky with strollers though because of its many different levels.

The many levels is a general issue with the National Air and Space Museum as multiple exhibits have stairs and most do not have ramps at all.  We’re curious how things will look after the massive renovation that is just getting underway.  For those considering visiting over the next two years, read up on the state of the renovations before you go.  Because of the extensive nature of the renovations, at various times significant chunks of the museum will be closed.  Some of the exhibits will be temporarily relocated to the Annex also so if you want to see a specific thing you will need to do some research.

The rooms on the west end that focus on the early years of flying were interesting for the kids because they had complete aircraft.  Same for the military rooms upstairs, although note that those are fraught with stairs.

The boys were interested to spend time in the rooms covering the Wright Brothers and the Apollo missions.  Stairs weren’t an issue here with the stroller, which was nice.  The final room we went in was “Time and Navigation.”  This is probably the least approachable for kids in its current form, though there is plenty for the adults to absorb.  We never really get to spend enough time there to read everything.

Plus we were going a bit fast at this point so we could sneak over next door before it closed.  See the post next Wednesday (yes, a special one, but it will be short) for exactly where!