This was a new location for us and we weren’t sure how the kids would handle the visit.  It was not as hot as it had been earlier in the week, but it was still hot and one would be spending much of the day outside.  Rain was not in the forecast, though we ended up wet from a brief shower mid-afternoon, that did serve to cool things off a bit.

The location is reasonably easily to get to and reasonably stroller friendly.  We did have to leave the stroller outside in the main house and some of the dirt paths are rather steep, but nothing that posed significant problems.

When you arrive and buy your tickets you receive a time stamp for entry into the main house.  Everything else on the property is open and available for you to explore at your leisure.  And, there is plenty.  We were there the entire day and still didn’t get to the Distillery.

We started with the upper gardens gardens, blacksmith’s shop, and spinning house.  All the gardens are still maintained, though more sparsely than they would have been.  One question I had is what happens to the food that grows there today as they did not seem to be harvesting anything.  There is a small garden oriented gift shop near the kitchen gardens, but we didn’t go in.

We then headed to the 12-acre lawn and bowling green.  These two large grassy areas in front of the house represent the view visitors would have had when they arrived.  The picture below is taken from the Bowling Green gate which separates the two lawn areas.

Then we took our house tour.  As I mentioned the stroller needed to be left outside.  The tour was about 45 minutes, which was within the attention span of our group.  Each room had its own guide, all of whom were very knowledgeable and friendly.  You are on your feet for the entire tour with two flights of stairs.  Keep that in mind if planning a visit.  The colors are vibrant and bright, very different from the current grays one sees in houses.  Another significant difference from today is that the kitchen is separated from the house by an outdoor walkway to keep the heat and smells at a distance. 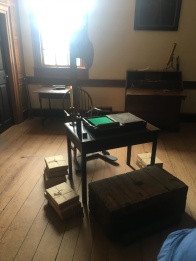 Following the house tour we went back to the museum building you enter through to eat lunch.  They have a food court and a sit-down restaurant.  We chose the sit-down restaurant which turned out to be excellent.  It is a largely modern take on traditional foods, but is very homey and kid friendly and we didn’t feel we were paying a fortune at a tourist trap.  Highly recommend eating here for any group vs another food court stop for hamburgers and french fries.

After lunch we headed back past the lawns to the lower garden, animal pastures, stables, and orchard.  These areas were less developed than the upper garden, but still offered something to see and plaques describing what things would have been like when Washington lived.

We saw the Old Tomb where Washington was first buried.  His will stipulated a new tomb be built, which happened and his body was moved there.  We visited this tomb next.  To be honest, neither tomb really had much to see.

Near the new tomb is the Slave Memorial.  As would have been normal for a man of his wealth in that time and place, Washington had a number of slaves at Mount Vernon and his other properties.  This aspect of history is discussed well throughout the property.  George Washington, and later Martha, freed their slaves upon their deaths.  The slaves were clearly a critical part of the running of the plantation.

We continued down the hill to the dock and Pioneer Farm.  Here we ran into the one re-enactor that I would have preferred not to run in to.  The sixteen sided barn was interesting, but the woman explaining it rather trapped you inside so it was impossible to step in to see it without getting stuck for a long while.  We wanted to catch the shuttle back up the hill.  Since it only comes every thirty minutes or so it was important to keep moving.  Also, this was towards the end of the day with many small kids who just weren’t up for a long talk by this point. 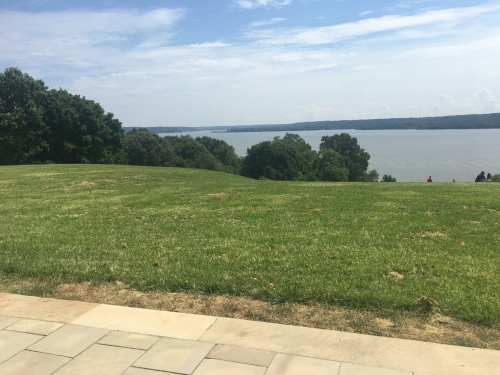 On our way out we went through the museum.  All in all it was a successful day.  I hadn’t known what to expect when we started since looking at historical stuff with kids can be hit or miss.  But, there was enough interesting things, enough movement, and not too much stuffiness as to make the day run quite smoothly.