Now that we’re more settled, it seemed like a good time to share some of the design elements of the new house.  Much is standard, but I will share some of where we were able to make changes or design choices.  I’ve posted a few already:  the pull-out bathroom trash and walk-in pantry.

I wanted small tiles around the fireplace, so this is what we went with: 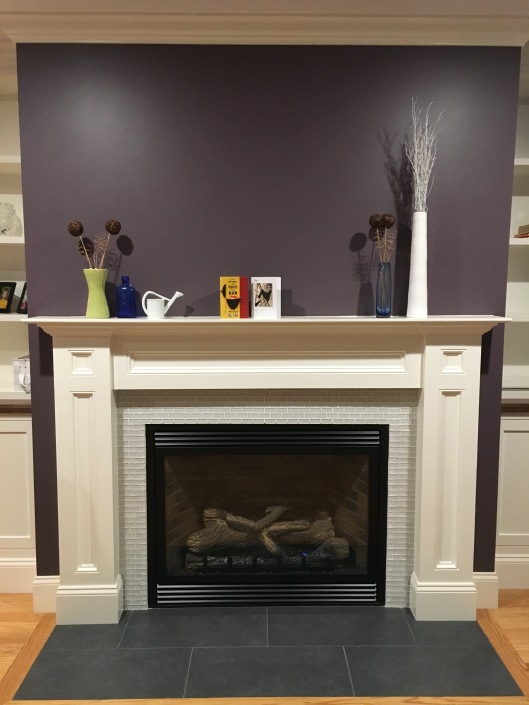 The paint is Benjamin Moore Cabernet (purple) and Mascarpone (white).

The tiles are Loft Super White 1×2 for the surround and Living 12×24 Black for the hearth.   One thing we learned is that the best solution for the exposed edges of glass tile is to purchase some 1×1 tiles and fit them in rather than cutting the glass.

I also mentioned that I had hung the mirror over the fireplace.  Unfortunately, it fell and broke so its not in the picture and we need to decide if we’re going to replace it.  I was trying to use Command strips for hanging in this house.  I had used them with posters in the previous house and they removed very easily without marking the paint.  But, two items have fallen days after being hung using the Command strips here.  Now, neither had a finish like a standard picture frame.  But, both had many more Command strips than the packaging recommends by weight.  And, both fell because the Command strip separated from the item – not because the velcro failed.  So, I’m going to revert to nails going forward as I don’t want to be dealing with further breakage.  All in all, not a positive experience.